“For thus says the Lord: ‘Even the captives of the mighty shall be taken, and the prey of the tyrant be rescued, for I will contend with those who contend with you, and I will save your children.’” (Isaiah 49:25)

The Youth of the Iglesia Filipina Independiente (YIFI) condemns in the strongest terms the arrest on May 1 in Iloilo City of diocesan youth officer MC Mace Sulayao, her father Rev. Marco Sulayao and 40 other individuals from progressive organizations, the community media and a lawyers’ group, gathered for a caravan asking justice in the slay of longtime Panay activist Jory Porquia a day prior.

Bayan-Panay and several organizations had originally intended to gather for Labor Day, coordinating with the local government unit beforehand. The campaign then refocused on Porquia after he was mercilessly killed. To comply with measures to prevent COVID-19 transmission, each participant wore a face mask and would observe social distancing protocols throughout the indignation caravan.

As the group gathered at Jaro District Plaza, the police asked them to forego the event. The group peacefully negotiated, promising they would observe social distancing even inside the vehicles and alight from them only at the end of the caravan’s route, the spot where Porquia was killed, to lay a wreath and light candles. When the police ultimately denied their appeal, the group agreed to disperse. As they were about to leave, riot police cordoned them off and then arrested them.

Among those currently detained from that incident are Rev. Marco, chair of Promotion of Church People’s Response (PCPR) Panay and Guimaras and active parish priest of IFI, and daughter Mace, the general secretary of the YIFI Diocesan Youth Executive Council in Iloilo and a coordinator of the regional ecumenical youth group under the Kalipunan ng Kristiyanong Kabataan sa Pilipinas. Also detained were PCPR Panay-Guimaras general secretary Paz Garachico; Krisma Nina Porquia, daughter of the slain activist; and Atty. Angelo Karlo T. Guillen of the National Union of People’s Lawyers, the group’s legal counsel.

The police are preparing to charge each one of the 42 for violation of the Public Assembly Act (Batas Pambansa 880), disobedience to an agent of a person in authority, violation of the Mandatory Reporting of Notifiable Diseases and Health Events of Public Health Concern Act (RA 11332) and the Bayanihan to Heal As One Act (RA 11469).

We are appalled by the highhanded reaction of the police to a sincere and harmless attempt to express opinions. The group willingly talked with the police and ultimately conceded to their will, so in no way would they be disobedient. They should also be protected by their constitutional rights to express their opinions and peaceably assemble, inalienable despite the pandemic. Including the 42, at least 92 individuals were arrested on Labor Day nationwide and slapped with similar violations. They include workers, labor leaders and relief volunteers, some arrested largely because of the intensified red-tagging and purge on dissent.

Before these arrests, it should be noted that the government took it easy on Sen. Koko Pimentel, who deliberately broke protocols even as he had COVID-19, and Overseas Workers Welfare Administration (OWWA) Deputy Administrator Mocha Uson, who held a mass gathering for quarantined overseas Filipino workers in Batangas. Justice Secretary Menardo Guevarra said of the senator: “…[T]he DOJ will temper the rigor of the law with human compassion.” OWWA Administrator Hans Leo Cacdac defended Uson, saying she “had the best of intentions” and “carried out the message.” These exhibit how hypocritical and biased this government has been.

What transpired in Iloilo City is an insult to the 1987 Constitution, the highest law of the land. It also reflects a human rights emergency that has only intensified with the COVID-19 lockdowns.

We call on all members of the YIFI and the IFI to join our appeal for the freedom of Rev. Marco, Mace and the rest of the Iloilo 42. We ask for the same “human compassion” for people who “had the best of intentions” and “carried out the message.” We also ask everyone to appeal that the government serve justice in the case of Jory and many other human rights defenders felled with impunity.

United, let us all express concern over the so-called “lockdown crackdown” on legitimate dissent, the paranoia over compassionate relief efforts from well-meaning individuals and institutions, the heavily militarized approach to a medical issue, and the evident bias for allies of the administration. Let us also pray for the enlightenment of government officials and law enforcers so they may not perpetuate past mistakes and treat each person – including dissenters, the poor, and other marginalized and vulnerable sectors – with justice.

Let justice and peace reign on the land. Uphold democracy. Free the Iloilo 42!

“The Lord is close to the broken-hearted and saves those who are crushed in spirit.” (Psalm 34:18) 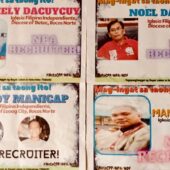 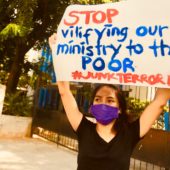