Fear not, for I am with you; be not dismayed, for I am your God; I will strengthen you, I will help you, I will uphold you with my righteous right hand. (Isaiah 40:10)

With only a matter of days left in the Duterte administration, the unfounded tagging of Msgr. Walter Alipio de Asis Cerbito as a terrorist, as an alleged member of Christians for National Liberation also designated previously as a terrorist organization, is an affront to his Christian faith and his lifetime of mission and ministry. As Church and Civil Society leaders, we stand together and denounce the actions of the Anti-Terrorism Council (ATC) and their release of a resolution that also designated Luis Jalandoni, a former priest, who has been representing the National Democratic Front of the Philippines(NDFP) in peace talks with the Government of the Republic of the Philippines(GRP).

Msgr. Cerbito is a respected man of the cloth who has been at the forefront of human rights advocacy and ministry with poor and marginalized communities. In Northern Samar, Msgr. Cerbito is renowned for upholding a prophetic stand against human rights abuses. His advocacy has angered powers-that-be, including the military and other government officials who had oppressed local communities and violated their democratic rights. Prior to Cerbito’s retirement, he was active in the ministries of the Church; however, alongside his other priestly duties, he vigorously pursued social justice and lived in solidarity with the struggling poor. While desig-nated as vicar-general of the Diocese of Catarman, he also served as the chairperson of the Promotion of Church People’s Response-Northern Samar as well as a regional council member of Promotion of Church Peo-ple’s Response-Eastern Visayas and KATUNGOD-Sinirangan Bisayas (KARAPATAN).

Meanwhile, Luis Jalandoni has faithfully served as chief peace negotiator for the NDFP for several decades. As a former priest, Jalandoni still emulates Christian values and a dignity of conduct from which many Filipinos could learn. Despite principled differences with the Duterte government or any GRP administration before this, Jalandoni has never been observed to behave in so-called “terroristic” ways. His soft-spoken speech and respectful interactions with others are an outward manifestation of an inner-discipline of upright and trans-formative conduct. While it is true that Jalandoni is an unabashed revolutionary, no indicators or true evidence has been shown that Luis Jalandoni has engaged in any act of terrorism.

These designations only prove our fears on the inherent dangers of the Anti-Terrorism Act of 2020 (ATA2020). Rather than stopping terrorism, the law is more likely to be weaponized against legitimate public dissent and opposition, as has happened to Msgr. Cerbito. Even more, such unjust, unwarranted, and secretive terrorist designation by the Anti-Terrorism Council of Luis Jalandoni, and the entire NDFP for that matter, effectively undermines peacebuilding efforts, especially through peace negotiations. Peace Talks that address the roots of the armed conflict are still a better way; a negotiated political settlement between the NDFP and the GRP through Peace Talks is still the hope and clamor of peace advocates throughout the country.

We deplore the recent designation of Msgr. Cerbito as unfounded, merely on the basis of guilt by association. We can only extrapolate that manufactured testimonies of alleged rebel returnees under the custody of the AFP/PNP may have been used against Msgr. Cerbito. Circumstances surrounding such witnesses render their affidavits highly questionable, biased, and unreliable.

The possibilities loom for any Filipino Church leader engaged in human rights ministry to be designated as a terrorist under ATA2020. We stand with Msgr. Cerbito to fight this designation. Filipinos should continue to assert our democratic rights to work for social justice and struggle to overcome the oppressive and exploitative conditions present in many local contexts. It would be unconscionable to allow those who stand for justice to be demonized as terrorists. The militarists in government seek to steal our freedom, criminalize our right to dissent, and weaken our democracy. We say NO to red-tagging, terrorist designation and tyranny! 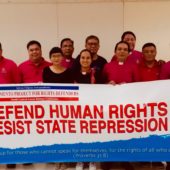 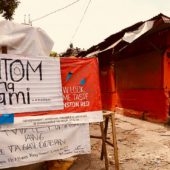