GENEVA, Switzerland – The Ramento Project for Rights Defenders (RPRD), a human rights program of the Iglesia Filipina Independiente (IFI), will be at the United Nations (UN) office here when the Philippines undergoes the Universal Periodic Review (UPR) for its human rights record on Nov. 14 at 9 am (4 pm, Philippine time).

“We are here not simply to watch the UPR, but to make sure the voices of victims are heard and the Philippine government recognizes its violations,” said RPRD program officer Vaughn Alviar, part of the delegation of the Philippine UPR Watch.

The UPR Working Group will review the Philippines for the fourth time, investigating how the country did on January 2017-July 2021 in relation to human rights. The country’s first, second and third UPR reviews took place in April 2008, May 2012 and May 2017, respectively.

An innovation of the UN Human Rights Council (UNHRC), the UPR is a process through which all 193 UN member states undergo an assessment of their human rights records. The UNHRC website explains that the “ultimate goal of UPR is the improvement of the human rights situation in every country with significant consequences for people around the globe.” (Read about the UPR here.)

“We do not want this review to become an image-building enterprise for the Marcoses or the Dutertes. The reports we passed to the UPR prove that, from the IFI and the ecumenical movement in the Philippines alone, human rights violations occurred and need justice,” said Alviar. “These should not be covered up.”

The RPRD submitted in early 2022 an individual report enumerating human rights violations against lay and ordained members of the IFI, its third since beginning to participate in the UPR mechanism in 2012. (Read the submission here.)

RPRD also joined a joint report with the World Council of Churches, the Asia Pacific Forum, the National Council in the Philippines (NCCP) and the United Church of Christ in the Philippines. There, the groups tackle human rights violations on member churches and partners of the NCCP. (Read the submission here.)

Both reports took off from a recommendation to the Philippines from the third cycle: “Take all necessary measures to promote the enjoyment of freedom of expression, religion and civil liberties” (Botswana 133.70).

Submissions from civil society groups, including the church, serve as sources for the UPR Working Group and the member states engaging in the process’ dialogues, explained RPRD executive director Rev. Jonash Joyohoy. “That’s why we’ve never missed submitting a report to the UPR since 2012.”

“This time around, we decided to also take part in a joint report because we felt that the attacks on churches ‘observably increased, diversified and became emboldened,’ as we noted in the joint submission,” he said. “We felt that coming together would give our issues the attention they deserve.”

The “Summary of stakeholders’ submissions on Philippines,” which the UPR Working Group released on Aug. 31, collated 24 individual submissions, 33 joint submissions and the document passed by the Commission on Human Rights.

“If you look at that issuance, you will find that the submissions we made informed many of the serious allegations,” said Rev. Joyohoy. “Our hope now is for the claims in the summary, backed up by evidence from RPRD, its partners and so many other groups, to inform member states and the UPR Working Group, as well as the Philippine government, about how to improve the situation.”

The 18-page summary drew attention to some details of the RPRD submissions, among them the criticism of the extrajudicial killings and the culture of impunity in the Philippines, as well as the counterterrorism efforts anchored on the National Task Force to End Local Communist Armed Conflict’s (NTF-ELCAC) militarist and disinformation campaigns that even branded humanitarian efforts as “leftist.”

The reports also hit the Anti-Terrorism Act of 2020 (ATA) and the legal offensive against human rights defenders, including the arrest of former IFI youth leader and NCCP vice chair AldeemYanez and the perjury charge against Rev. Wilfredo Ruazol, a program officer at RPRD, and a few others.

The submissions sought, among others, the abolition of the NTF-ELCAC, the repeal of the ATA and the resumption of principled peace negotiations between the Philippine government and the National Democratic Front of the Philippines.

Alviar worried that the human rights violations prevailing in the country during the period under review would be downplayed if the national report – which the Philippine government passed days after the official deadline – was an indication.

“‘The Philippines takes pride in having one of the most vibrant democracies in the world, which can be measured by how well its people’s freedoms are exercised and their rights respected, protected and fulfilled,’” he noted. “Those are not my words. Those are from Page 21 of the Philippine government’s national report.”

“If the Philippine government refuses to tell the truth before the international community, may the 110 countries who have decided to speak during the review dig deeper,” he added.

Belgium, the United Kingdom, the United States and Canada registered questions about the welfare of journalists. With Spainand Germany, they also seek clarification on the wars on drugs and terror.

“The Philippine government should answer the questions truthfully. They should not discredit the human rights violations that occurred under former President Rodrigo Duterte or that are occurring now under President Ferdinand Marcos Jr.,” said Joyohoy. “The UPR is no place for lies.” 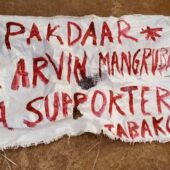 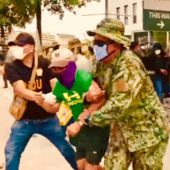