He is one of the newest church-based personalities to be brandished as a member of the rebel movement by notorious state agency National Task Force on Ending Local Communist Armed Conflict (NTF-ELCAC), but this priest of the Iglesia Filipina Independiente (IFI) based in Ilocos Norte vows to keep advocating for peasants in the Ilocos Region.

Police, in a public forum organized by NTF-ELCAC on Nov. 1, reportedly flashed a photo of Rev. Arvin Mangrubang from IFI Diocese of Laoag, flagging him as a Communist Party of the Philippines (CPP) member and a recruiter for its armed group, the New People’s Army (NPA).

“For the record, I am unequivocally denying any connection to the communist movement,” said the priest. “As past instances of red-tagging, this is unsubstantiated. It is designed to make principled advocates cower. That I will not do.”

He added: “I have nothing to hide. I am forwarding the advocacies and calls of peasants because it is part of my duty as a servant of God. This malicious attack will not stop me.”

Rev. Mangrubang noted that authorities took a photo of him during a forum of peasant leaders in Vintar, Ilocos Norte, on Oct. 29. The priest said military troops in full battle gear harassed the attendees and tried to stop the event.

Peasants are among the most poverty-stricken and vulnerable groups in the Philippines, with compounding concerns brought on by poor agrarian reform, the climate crisis and lack of access to government support. Laoag

Bishop Vermilion Tagalog said he feared for the life and safety of Rev. Mangrubang following the red-tagging. In other parts of the country, people who had been publicly accused of membership to the CPP because of their advocacy for justice and peace were felled extrajudicially.

The bishop believed the attack on his priest was part of the government’s systematic vilification of the IFI, and a baseless offense that put the servant, his family and the communities he served at risk.

Also in November, NTF-ELCAC revived a previous claim that the IFI was part of a network of churches and church-based institutions recruiting for the underground communist movement. The church’s leadership strongly denied the accusation at various levels.

Bishop Tagalog said the government should refrain from attacking the IFI.

“The government should immediately stop red-tagging the IFI and our priests here in the Ilocos Norte and in other dioceses. Rev. Mangrubang is just one of our priests being vilified for his social witness and advocacy for peasants’ rights, and there are many others who are being accused of the same. This nonsense must stop, ” he said.

In a statement on Dec. 3, IFI Obispo Maximo Rhee Timbang denounced the Armed Forces of the Philippines (AFP), the Philippine National Police (PNP) and NTF-ELCAC for their “obsession to quash the insurgency movement” and for “only (seeing) red in everything and in everybody.”

“[Rev. Mangrubang’s case of] red-tagging has connection with the continuing efforts of the AFP, PNP, and NTF-ELCAC in the area, particularly around Surrong Valley, to malign and vilify legal people’s organizations and churches like the IFI,” reads part of the his statement.

The bishop also vehemently condemned the government’s accusation against the IFI as a “front organization” of the underground communist movement: “We protest the [red-tagging of] the IFI and its clergy as fronting for and recruiting members to the CPP-NPA-NDFP.”

Rev. Mangrubang reiterated that NTF-ELCAC’s accusation against him was “purely imaginary, if not hallucinatory.”

“I am a priest, not a communist or a terrorist as the military and the government wish to portray. I will stand steadfast in my ministry as a priest and will continue to uphold and support the Ilocano peasants’ fight for their land and rights,” he said.

Rev. Mangrubang has been subjected to threats and harassment by alleged state security personnel in the past. The priest has received repeated death threats since 2017 and was reported to have been included in the military’s order of battle in the Ilocos Region.

See: “Another IFI priest gets death threat, named in a military hitlist,” June 29, 2018 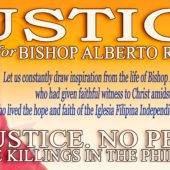 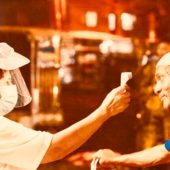