Bishops of the Iglesia Filipina Independiente (IFI) condemned another incident of red-tagging involving a woman bishop and two priests in the northern part of the Philippines.

On June 26, malicious flyers and posters were found near IFI churches in Batac City and the town of Bacarra, both in Ilocos Norte, accusing anew Bishop Emelyn Gasco-Dacuycuy and Reverends Noel Dacuycuy (the bishop’s husband) and Randy Manicap as recruiters of the New People’s Army (NPA), the armed wing of the communist rebellion in the Philippines.

This recent attack followed incidents on June 2 and 3 when posters and tarpaulins in Batac City, Laoag City and the municipality of Banna in Ilocos Norte branded the above ordained ministers and another priest, Rev. Arvin Mangrubang, as NPA recruiters.

“These malicious and false claims are putting the lives of our fellow ministers in great peril. This red-tagging of our bishop and priests is unacceptable and must stop,” said Bishop Porlares.

When asked who he thought could be responsible for the sustained attempts to connect the IFI ministers to the NPA, Porlares noted that the church’s national leadership was strongly convinced these were the work of the government’s National Task Force to End Local Communist Armed Conflict (NTF-ELCAC).

In a statement released on June 7 by Most Rev. Rhee Timbang, IFI Obispo Maximo, the church leader pointed out that red-tagging has become the state’s “official policy” through the NTF-ELCAC.

He urged the government to “stop the unconstitutional practice of red-tagging” which has been used to “publicly accuse human rights activists” as supporters of the Communist Party of the Philippines (CPP) and its military arm.

Timbang said that “red-tagging precipitates violence against those who were unjustly named.”

Porlares is also the current Vice-Chairperson of the National Council of Churches in the Philippines (NCCP). The ecumenical organization likewise denounced the attacks against Bishop Gasco-Dacuycuy and her colleagues in a statement on June 11.

For North Central Luzon Bishops Conference (NCLBC) chairperson Bishop Dindo Ranojo, the persistent red-tagging of church people should be countered. He believes an ecumenical fact-finding mission would help “correct the false narratives” being made against Bishop Dacuycuy and the three priests, and “hold the perpetrators accountable.”

“Red-tagging has been vilifying church people over the years. It has harassed pastors, religious, bishops and priests from the Catholic and Protestant churches alike. Now may be the time for us to resolutely and collectively act together to put an end to this evil,” Ranojo said.

Ranojo vowed to bring the matter to the  Ecumenical Bishops’ Forum, a nationwide fellowship of Catholic, Protestant and Evangelical bishops in the country, where he sits as General Secretary.

Bishop Gasco-Dacuycuy is one of EBF’s co-chairpersons together with United Methodist Bishop Ciriaco Francisco.

Days earlier, NCLBC held an advocacy forum-expose on the red-tagging of Bishop Gasco-Dacuycuy and the 3 priests and condemned the vilification campaign against them.

Present at the forum were faith-based human rights defenders, leaders, and representatives of various IFI dioceses and other denominations who called on the government to put an end to the red-tagging of church people. 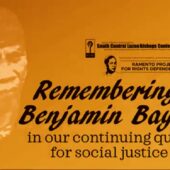 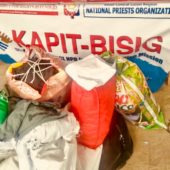