Catholic and Protestant leaders in central Philippines have shown their mutual concern against the proposed 174-hectare reclamation off the coast of Dumaguete City.

Despite the rain, church people in Negros Island have united in a call to prayer against the P23 billion project at the city’s iconic Rizal Boulevard on Saturday.

In a statement, the faith leaders said that it is the responsibility of the Church as “steward of creation” to protect nature.

“The building of two artificial islands disrupts the ocean topography and burying of coral reefs that sustain life on land and in the oceans will cause incredible damage to the biodiversity, affecting generations to come,” they said.

They also raised concerns on the effects of the reclamation on local fishing industry.

“This will all the more damage and lead to unwarranted abuse of our God-given natural resources,” they added.

The church leaders also stressed that the damage that the reclamation would cause “outweighs the good it intends to achieve.”

Catholic Bishop Julito Cortes of Dumaguete, Bishop Allan Caparro of the Iglesia Filipina Independiente, and Rev. Marlen Villaflor of the United Church of Christ in the Philippines were among those present in the ecumenical service. 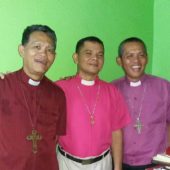 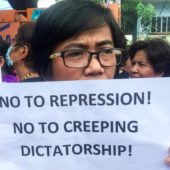